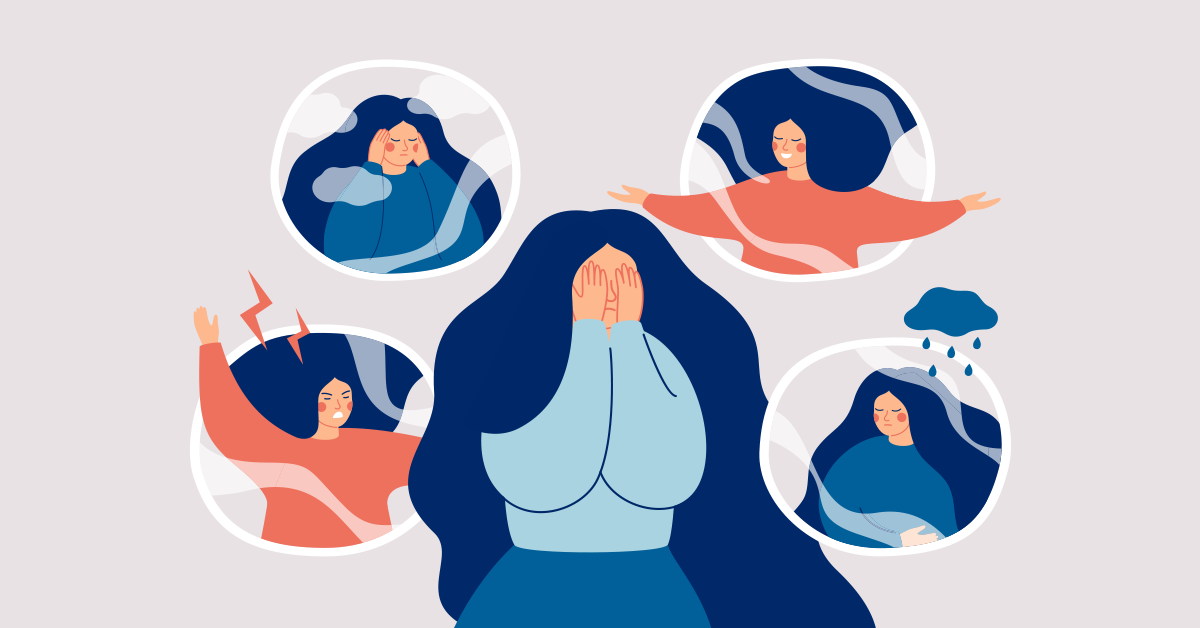 It’s not uncommon for people who experience one mental health disorder to also have another.

In fact, comorbidity, or the presence of two or more disorders in the same person, is quite common. According to a report from the National Alliance on Mental Illness (NAMI), more than half of all people who suffer from anxiety also experience symptoms of depression.

Comorbidity can make finding the correct diagnosis and treatment more pressing and complicated. It can be difficult to determine which symptoms are caused by which disorder. And, because each disorder may need to be treated differently, it’s crucial to get an accurate diagnosis for each one.

In this article, we’ll take a closer look at mood disorders as well as the prevalence, diagnosis, and treatment of mood disorder comorbidity.

The causes of mood disorders are not fully understood, but they are thought to be the result of a combination of genetic, biological, psychological, and environmental factors.

Mood disorders tend to run in families, so there’s likely a genetic component, but it’s not just genes that play a role. Brain chemistry and hormones may also play a role in mood disorder development.

Environmental factors, such as stress or trauma, can also trigger or worsen mood disorders. Also, some experts believe that certain personality types may be more susceptible to developing mood disorders.

While the exact cause of mood disorders is unknown, it’s clear that there are multiple factors involved, all contributing to the development of one or more mental health issues and concerns.

What Causes Comorbidity of Mood Disorders?

The comorbidity of mood disorders in patients is still being studied, but several theories exist.

One theory is that comorbidity occurs because the same underlying factors play a role in the development of multiple disorders. For example, if a person has a genetic predisposition for mood disorders, they may be more likely to develop multiple disorders.

Another theory is that one disorder may trigger the development of another. For example, someone with major depressive disorder may be more likely to develop anxiety or substance abuse issues. Substance abuse often develops alongside depression and anxiety disorders due to the need to self-medicate and control the symptoms.

Mood disorder comorbidity can lead to:

Comorbidity is a complex issue, and there’s still much to learn about the cause.

No matter the cause, mood disorders can have a serious impact on your life. When multiple disorders are present, the effects can be even more severe.

Bipolar disorder is less common, but it’s also quite serious. Bipolar disorder affects about 2.6% of adults in the U.S., and it’s responsible for a large proportion of psychiatric hospitalizations.

Other mood disorders include:

As mentioned above, as much as 60% of all people with anxiety also experience depression. And according to the National Institute of Mental Health (NIMH), people with bipolar disorder are at a higher risk for developing other mental health disorders.

Because mood disorders are so common, it’s essential for doctors to be aware of the possibility of comorbidity when making a diagnosis. When diagnosing a mood disorder, doctors will often ask about other mental health issues that may be present.

If comorbidity is suspected, doctors may refer the person to a mental health specialist for further evaluation. This is critical to the diagnosis process because each disorder needs to be treated as a separate condition while, at the same time, in relation to any other present concerns.

Treating mood disorders can be complex. In general, treatment will focus on relieving symptoms and improving the patient’s ability to function in their normal, daily lives. Treatment may include medication, counseling, or a combination of both.

If you or someone you know is struggling with a mood disorder, it’s possible to manage the condition and live a healthy, happy life with treatment.

At Midwest Ketafusion®, we understand how difficult it can be to live with mood disorders. That’s why we offer ketamine therapy, a groundbreaking treatment that can provide relief from mental health issues and symptoms — including the comorbidity of multiple mood disorders.

Ketamine is a medication that’s been shown to be highly effective in treating mood disorders. It works by blocking the NMDA receptors in nerve cells, which are involved in transmitting pain and anxiety signals to the brain.

Our goal is to help you find relief from your symptoms by treating the underlying conditions at the source — not just by masking or covering up the issue. We create individualized treatment plans that are molded around your unique situation.

If you’re struggling with one or more mood disorders, don’t hesitate to reach out for help. We’re here to provide you with the support and resources you need to heal.

Click the link below to learn more about how the Midwest Ketafusion® team can help!